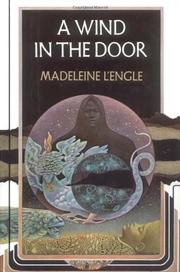 A WIND IN THE DOOR

"It's not right in the United States of America that a little kid shouldn't be safe in school," but after hearing a sample of Meg and Charles Wallace Murry's conversation ("Do you suppose I'll ever be a double Ph.D. like you, Mother?") we suspect that their peers' dislike of them may be based on more than brute anti-intellectualism. Anyway, genius first-grader Charles Wallace is deeply involved with his mother's discovery of mitochondria and farandolae; in fact, he's suffering from mitochondritis, and his illness is an important part of the plans of the evil Echthroi who have torn a hole in the galaxy. A mystical teacher, Mr. Blajeny, and a cherubim Proginoskes warn Meg that to save her brother she must learn to love even the unsympathetic school principal Mr. Jenkins (who's kind of like Salinger's fat lady). Having accomplished this task and thereby successfully differentiated Mr. Jenkins from two Echthroi impersonators, Meg journeys with Calvin and Mr. Jenkin's fight down into Charles Wallace's cells to lecture his warring farandolae on "the great plan" and every organism's "unique share in the freedom of creation." The audacity of Ms. L'Engle's mytho-scientific imagination and her undoubted storytelling abilities keep the reader involved in Meg's quest, but one wonders whether its chief appeal doesn't lie in the all too natural desire to believe that our difficulties, like the Murrys', are personal attacks by the forces of cosmic evil — who doesn't like to speculate that their nasty old school principal is really an agent of the devil? Unfortunately, Meg learns to love the universe with unconvincing ease, and L'Engle seems to be straining unusually hard to relate what's wrong with America to the double-talk phenomenon of mitochondria and farandolae.