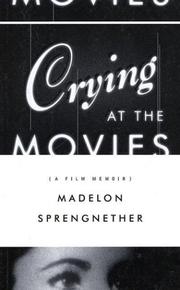 CRYING AT THE MOVIES

Sprengnether (English/Univ. of Minnesota) grapples with unresolved grief expressed in the unlikely setting of a movie theater. During a summer boat trip on the Mississippi in 1951, young Madelon’s brother, showing off new swimming strokes learned at the neighborhood YMCA, was suddenly carried out of his depth. Their father entered the water and managed to push the boy toward shore before he himself was drowned. Concealing their sorrow—during the ’50s, it was important to “show the world a good face”—the family never actually mourned. It wasn’t until 1969, when Sprengnether was six months pregnant and living with her first husband in snowbound Vermont that the initial cracks appeared in her controlled facade. While teaching a course on film, she began to sob uncontrollably at the climax of Satyajit Ray’s Pather Panchali. This experience was repeated several times at various movies. Examining The Piano, The Cement Garden, and Fearless, among other films, the author tries to understand the meaning and form of her bereavement. Unfortunately, her musings never quite capture the reader’s imagination or emotions. It doesn’t help when she distastefully cranks up the volume with frequent disquieting references to sibling incest . . . only not really, as she concurs with former President Clinton’s definition of sex.

Another who-cares addition to the already groaning shelves of tell-alls. (10 photos)