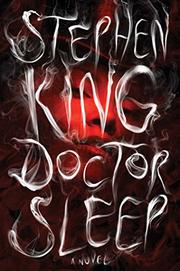 Before an alcoholic can begin recovery, by some lights, he or she has to hit bottom. Dan Torrance, the alcoholic son of the very dangerously alcoholic father who came to no good in King’s famed 1977 novel The Shining, finds his rock bottom very near, if not exactly at, the scarifying image of an infant reaching for a baggie of blow. The drugs, the booze, the one-night stands, the excruciating chain of failures: all trace back to the bad doings at the Overlook Hotel (don’t go into Room 217) and all those voices in poor Dan’s head, which speak to (and because of) a very special talent he has. That “shining” is a matter of more than passing interest for a gang of RV-driving, torture-loving, soul-sucking folks who aren’t quite folks at all—the True Knot, about whom one particularly deadly recruiter comments, “They’re not my friends, they’re my family....And what’s tied can never be untied.” When the knotty crew sets its sights on a young girl whose own powers include the ability to sense impending bad vibes, Dan, long adrift, begins to find new meaning in the world. Granted, he has good reason to have wanted to hide from it—he still has visions of that old Redrum scrawl, good reason to need the mental eraser of liquor—but there’s nothing like an apocalyptic struggle to bring out the best (or worst) in people. King clearly revels in his tale, and though it’s quite a bit more understated than his earlier, booze-soaked work, it shows all his old gifts, including the ability to produce sentences that read as if they’re tossed off but that could come only from someone who’s worked hard on them (“Danny, have you ever seen dead people? Regular dead people, I mean”). His cast of characters is as memorable as any King has produced, too, from a fully rounded Danny to the tiny but efficiently lethal Abra Stone and the vengeful Andi, who’s right to be angry but takes things just a touch too far. And that’s not to mention Rose the Hatless and Crow Daddy.

Satisfying at every level. King even leaves room for a follow-up, should he choose to write one—and with luck, sooner than three decades hence.


WANT TO KNOW THE LATEST BUZZWORTHY NOVELS? READ THESE.:

SOMEONE
by Alice McDermott
Fiction

THE SIGNATURE OF ALL THINGS
by Elizabeth Gilbert
Fiction

THE INSTITUTE
by Stephen King
Fiction

THE OUTSIDER
by Stephen King
Fiction

THE BAZAAR OF BAD DREAMS
by Stephen King

THE JOURNALS OF BOB DRIFTER
by M.L.S. Weech
Children

ALL THE CROOKED SAINTS
by Maggie Stiefvater
Newsletter sign-up