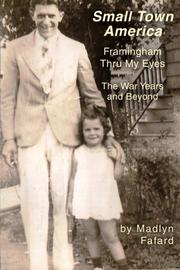 The War Years and Beyond

by Madlyn A. Fafard

A first-generation Italian-American, born in in the midst of the Great Depression, shares her real-life childhood experiences during World War II and the Cold War.

In this conversational recollection of her rural Massachusetts upbringing, Fafard (Secrets of the Heart, 2010) writes a paean to “the Greatest Generation.” Concentrating on her formative years, she writes of “yesterday, when I was young,” allowing her adolescent eyes and ever-questioning perspective to absorb the rough and tumble lives of her family and immigrant neighbors. She explains how difficult it was to be a person of Italian descent in a country at war with Mussolini’s forces and discusses the films and songs that helped her escape the daily reports of horror coming out of Europe. She acknowledges the lives lost and families torn apart by the war and the numerous hardships suffered by the people of Framingham generally and her own small family in particular. Despite the constant bootstrap-pulling, Fafard refers to her childhood several times as “idyllic.” She admits that she assumed while growing up that everyone else lived a life such as hers; some readers may wonder if the author misses her youth more than she laments the extensive social and political changes she’s witnessed. To back up her keen memories, Fafard cites the Military Channel and Wikipedia; she refers readers to YouTube to enhance their appreciation for Ella Fitzgerald and the Ink Spots. She occasionally goes on tangents featuring political editorializing (“we had few if any social programs to tie you to government handouts”) and mystical theories (“Could it be true, that we are in one of many universes that are infinite?”). The author dots the book with poems and black-and-white photographs; many illustrate Fafard’s nostalgic journey to a time when “bus drivers made change” and “dresses for women, jacket and shirt with tie for men” were “appropriate.”

A meandering memoir of the way things used to be and the gradual acceptance of modernity.