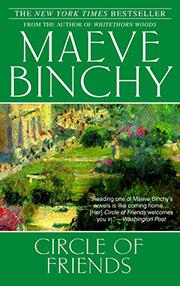 Another Blarney charmer from the irrepressible Binchy set, as many of her recent efforts (like Firefly Summer, 1988) have been, in an Irish village--called Knockglen--circa 1960. As usual, Binchy brings her habitat to life warmly, fully, and from the viewpoints of myriad cottagers, including a funny Irish-Italian restauranteur who aims to become Knockglen's Mr. Big; the stiff hotel proprietress whose passion is corsets; the looney butcher; and, above all, Eve Malone and Benny Hogan, the village's Mutt and Jeff. In Binchy's hands, their adolescence is a tender thing, full of hushed discussions about babies, bellybuttons, and nuns. Eve is an orphan, abandoned by the classy, Protestant Westward family and raised with a great deal of love by Mother Francis at St. Mary's Convent. Benny's the adored daughter of a Knockglen merchant, though ""no one on earth"" feels as ""cooped up and smothered"" as she does. At 18, it's off to University College in Dublin for the two young women, where they team up with ambitious vixen Nan Mahon, and where Benny falls hopelessly in love with campus heartbreaker Jack Foley. Amazingly, though, Jack returns her affection--or seems to, until Nan gets her hooks into him, since she's got herself pregnant by Knockglen squire Simon Westward and needs a stand-in daddy. Benny's sheltered childhood comes to a close not only because she loses Jack, but because her father dies suddenly of a heart attack during teatime, leaving Benny to sort things out at the shop. Meanwhile, Eve befriends Simon Westward's lonely little sister, which forces her to come to terms with her familial past. . .and life in Knockglen goes on. Binchy's at her impish best playing telephone amongst the villagers, reporting the wildly disparate ways they process events. Only eejits wouldn't find this companionable.