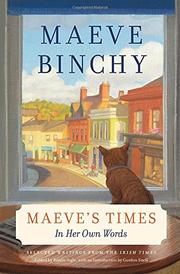 In Her Own Words

Newspaper pieces by a prolific novelist and playwright.

Binchy (Chestnut Street, 2014, etc.) began her writing career as a journalist for the Irish Times, starting out as women’s editor, from 1968 to 1973, and continuing as columnist, feature writer and reporter based in the newspaper’s London office; in 1988, she resigned a full-time position but contributed regularly until her death in 2012. This selection of her work represents Binchy’s eclectic interests, infectious sense of humor and wry take on social change. In early pieces, she reflected on her experiences as a waitress and choosing underwear in Australia. She didn’t much like her body (she was always overweight) and compared herself to those more slender and well dressed. In 1976, she tried a week of self-improvement, following suggestions in a women’s magazine, but failed to transform herself into one of the “new brand of unreal woman.” Nevertheless, she was a successful writer, and she also gleefully reported on the doings of the royals. In 1973, she was at Westminster Abbey (“lit up like an operating theatre”) for the wedding of Princess Anne to Mark Phillips, where Grace Kelly was among the guests, “staring into space, looking like she always looked, kind of immaculate.” In 1981, her subjects were the fairy-tale couple, Charles and Diana. Binchy was not surprised when they separated in 1987: “[T]here were always aspects of the royal romance that spelled danger from the word go.” She noticed that Sarah Ferguson, “a bit pudgy for a princess,” was on a strict diet. Unable to attend, she watched Kate and William’s wedding on TV: “I miss the magic of the English losing all their reserve,” she noted ruefully. A bit intimidated by Samuel Beckett, she nevertheless produced an insightful portrait of her compatriot, with his “spikey hair” and “ludicrous energy.”

A blithe, entertaining collection that will surely delight Binchy’s many fans.