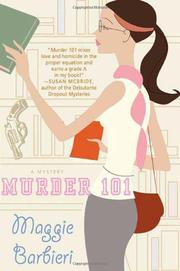 An English professor finds herself both the target of a murder investigation and the object of the investigator’s affections in Barbieri’s mystery debut.

Puking on a police detective’s shoes isn’t the smoothest move, but that’s exactly how English professor Alison Bergeron greets the news that freshman Kathy Miceli’s body has been found in the trunk of her car. And Bobby Crawford, owner of the shoes, is the good cop. The bad cop, a cranky guy named Wyatt in a bad suit, just wants to slap the cuffs on Alison. But Crawford prevails: He tails Alison patiently as her best friend, Max Rayfield, persuades her to break into LaSalle Hall and toss the room of Kathy’s boyfriend Vince; he shows up at her house to ask just a few more questions; and finally he takes her down to his family’s Seaside Heights beach house for a much-needed break. But even when Wyatt turns his attention toward others—including Alison’s ex-husband, Ray, whose affair with the dead girl makes him an especially promising suspect—Crawford remains focused on Alison, whose experience with an unfaithful ex makes her wary of any blossoming romance. It’s not until someone breaks into her office and stuffs her into the back seat of a Jeep that Alison realizes the police aren’t the only ones to treat with caution.

Alison is game enough, and her amatory life absorbing enough, to make you almost forgive the absence of authentic mystery.