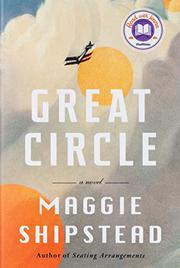 The intertwined journeys of an aviatrix born in 1914 and an actress cast to play her a century later.

In a novel twice as long as and an order of magnitude more complex than the well-received Seating Arrangements (2012) and Astonish Me (2014), Shipstead reveals breathtaking range and skill, expertly juggling a multigenerational historical epic and a scandal-soaked Hollywood satire, with scenes playing out on land, at sea, and in the air. "We were both products of vanishment and orphanhood and negligence and airplanes and uncles. She was like me but wasn't. She was uncanny, unknowable except for a few constellations I recognized from my own sky": These are the musings of actress Hadley Baxter. She has been familiar with the story of Marian Graves, an aviatrix who disappeared while trying to circumnavigate the globe, since she was just a little girl—before she became a pop-culture phenomenon, turned into a movie star with a mega-franchise, accidentally destroyed her career, and was given the chance to reinvent herself...by playing Marian in a biopic. The film, Peregrine, is based at least partly on the logbook of Marian's "great circle," which was found wrapped in a life preserver on an ice floe near the South Pole. Shipstead's story begins decades earlier, with the christening of the Josephina Eterna in Glasgow in 1909. The unhappy woman who breaks the bottle on her bow, the laconic captain who takes the ship to sea, the woman he beds onboard, the babies that result from this union—Marian Graves and her twin, Jamie—the uncle who has to raise them when their mother drowns and their father disappears: The destinies of every one of these people, and many more unforgettable characters, intersect in ways that reverberate through a hundred years of story. Whether Shipstead is creating scenes in the Prohibition-era American West, in wartime London, or on a Hollywood movie set, her research is as invisible as it should be, allowing a fully immersive experience.

Ingeniously structured and so damn entertaining; this novel is as ambitious as its heroines—but it never falls from the sky.