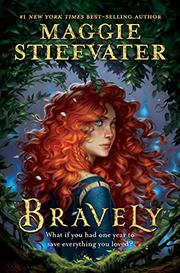 Disney adaptations are familiar, but this title marks a new gambit: a novel sequel that accepts the source movie, Brave, as canon.

Merida, now nearly 20, has negotiated a truce with her mother (they never talk about betrothals or marriage) and traveled the kingdom learning new things. But little has changed otherwise: The triplets are still a force of chaos, Merida prefers archery to embroidery, the kingdom is at peace, and magic is at rest. That is, until Feradach, the god who brings ruin in order to make room for growth, threatens to destroy everything Merida loves unless she can change her family enough to end their stagnation. This is still clearly a fairy-tale world, but Stiefvater’s understanding of medieval history (briefly detailed in the author’s note) grounds it, as does the very believable nature of Merida’s conflict: Saving what she loves means transforming it beyond what she knows. The episodic structure as Merida takes on three journeys, each with different family members, moves more slowly than the movie, but the depth of characterization—as shown in Feradach and Queen Elinor in particular—is nuanced and noteworthy. Readers who spent their childhoods watching Merida engage with magic will readily fall under her spell again as she negotiates the hardest challenge of all: growing up. All characters are assumed White.

A different kind of fairy tale, for older and wiser readers.