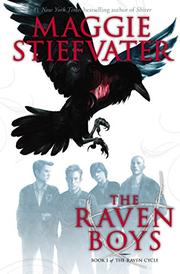 From the Raven Cycle series, volume 1

An ancient Welsh king may be buried in the Virginia countryside; three privileged boys hope to disinter him.

Meanwhile, 16-year-old Blue Sargent, daughter of a small-town psychic, has lived her whole life under a prophecy: If she kisses her true love, he will die. Not that she plans on kissing anyone. Blue isn't psychic, but she enhances the extrasensory power of anyone she's near; while helping her aunt visualize the souls of people soon to die, she sees a vision of a dying Raven boy named Gansey. The Raven Boys—students at Aglionby, a nearby prep school, so-called because of the ravens on their school crest—soon encounter Blue in person. From then on, the point of view shifts among Blue; Gansey, a trust-fund kid obsessed with finding King Glendower buried on a ley-line in Virginia; and Adam, a scholarship student obsessed with his own self-sufficiency. Add Ronan, whose violent insouciance comes from seeing his father die, and Noah, whose first words in the book are, "I've been dead for seven years," and you've got a story very few writers could dream up and only Stiefvater could make so palpably real. Simultaneously complex and simple, compulsively readable, marvelously wrought. The only flaw is that this is Book 1; it may be months yet before Book 2 comes out.

The magic is entirely pragmatic; the impossible, extraordinarily true.