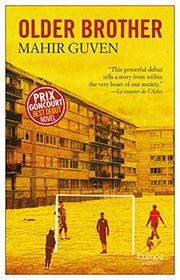 A tale of two French brothers of Syrian descent, one struggling as a rideshare driver, the other back in the Middle East on a (maybe) humanitarian mission.

Guven’s first book, winner of the 2017 Prix Goncourt for a debut novel, is a sharp prodigal-son tale about life on the margins outside of Paris. The “older brother” of the title has grown wise to the ways Muslims like himself are treated in a suburb he calls “the dump of France,” scraping out a living as an Uber driver and occasional police informant, roles that leave him feeling exploited; but his father, a widower and old-line taxi driver, feels that anything is better than his native Syria, which tends to stoke rants about civil war and religion. The “younger brother,” a hospital nurse, has disappeared to the Middle East, "likely right there with the lunatics, at war, on his way to death.” The younger brother weighs in on his fate in alternating chapters, explaining how his urge to make use of his medical skills brought him into, yes, Syria, where he works as a field medic supporting rebels against Bashar al-Assad’s regime. The younger brother is also disillusioned with France, where, despite the inclusive rhetoric after the Charlie Hebdo massacre, Muslims are “less-than-zeros in a society that teaches about equality and tolerance and respect,” and Guven’s novel is largely an exploration of how a shared fury at marginalization can play out in a variety of ways. Kover’s translation highlights the brothers’ differing temperaments: The older one’s street-wise, sarcastic, and jaded, the younger’s more naïve but spiritually righteous. The older brother suspects the younger has returned, prompting his concern that he’s been radicalized. Guven withholds whether that surmise is correct, giving the novel a thriller-ish vibe in its closing pages, but at heart it’s a contemplative story about what siblings owe each other.

A striking debut that reveals the breadth of emotional disconnection that prejudice can stoke within a family.