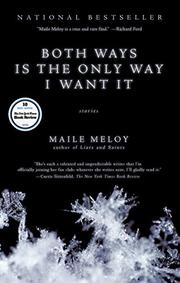 BOTH WAYS IS THE ONLY WAY I WANT IT

“Travis, B.” depicts a young cowboy, working away from his family and desperately lonely, attempting to woo an adult-ed teacher. His growth in self-awareness does not mitigate the heartbreak of his failure. “Lovely Rita” is another lost young adult; after her lover dies in a power-plant accident, she raffles herself off to raise money to find the father who abandoned her years before. While Travis and Rita are cut off from family, most of Meloy’s characters are alone within their families. The adolescent protagonist of “Red from Green” loves her father but goes away to school; recognizing his inability to protect her, she chooses loneliness as a permanent state. In “Liliana,” a Los Angeles man’s supposedly dead grandmother shows up on his doorstep, alive and ready to reject him all over again. “Nine” is Valentina’s age when her mother begins an affair with an Italian professor. It soon becomes clear that the affair is doomed, but Valentina mourns the loss of the man’s ten-year-old son in her life. “Spy vs. Spy” shows a man and his brother dealing with long-simmering sibling rivalry. Despite their relative brevity, these are complex stories, often showing several characters being pulled in different directions. In what may be the volume’s masterpiece, Leo meets with “The Girlfriend” of the man who raped and murdered Leo’s daughter. In an anti-O’Henry twist, the loving father unearths a truth better left buried: that his own protectiveness may have caused his daughter’s death.

The author seldom allows a trickle of hope to lighten her characters’ anguish, but she gives them a consciousness and dignity that make their experiences deeply moving.