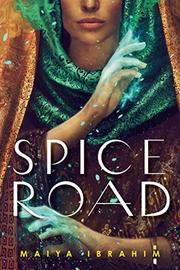 From the Spice Road series, volume 1

Seventeen-year-old Imani leaves the only world she’s ever known to bring home her disgraced older brother in this fantasy adventure.

Sahir is a place of magic, isolated from other nations and threatened only by the monsters that live in the magic-free wasteland known as the Swallowing Sands. Heartbroken by her beloved brother Atheer’s assumed death, Imani throws herself into her work as a member of the Shields, protecting her city of Qalia from these outside threats. She’s aided by the magical properties of Spice, a tea made from the bark of the ancient misra tree that temporarily allows those who consume it to control whichever element of the land they have an affinity for. When Imani finds herself face to face with the djinn Qayn, who claims Atheer is alive and assisting a rebellion in a country across the Swallowing Sands, she persuades the ruling Council of Al-Zahim to let her journey to this unknown land and bring him back. Ibrahim’s worldbuilding is fresh, with an exciting premise that not only promises a tantalizing romance, but explores classism, privilege, and a debate on the human responsibility to support those who are powerless. The novel is heavily influenced by Arab cultures with elements like food (for example, manakish and bamya) and representations of everyday life, like smoking shisha and discussing politics, that feel authentic and natural. All main characters have traditionally Arabic names with varying physical descriptors that speak to the diversity within the Arab world.