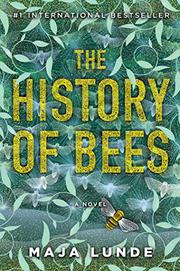 THE HISTORY OF BEES

Norwegian author Lunde puts imagination and research to work in this message-driven novel set in a gloomy past, a doomed modernity, and a dystopian future. Nineteenth-century British shopkeeper William Savage suffers from debilitating depression but finally gets out of bed when his children inspire him to try to build a better beehive. In 2007, a stubborn Ohio beekeeper named George desperately tries to interest his more academically oriented son, Tom, in the family business, even as environmental changes begin to impact its operation. In 2098, a young mother named Tao labors with her husband and everyone else in China, standing in the branches of fruit trees pollinating buds by hand. In just three years, her 5-year-old son will also be funneled into this physically debilitating and mindless work. She dreams of giving him an education and a better life, but instead, on their one Day of Rest in six months, he is catastrophically and mysteriously injured, then spirited out of town by the authorities. Tao’s quest to find her son and understand what happened to him will ultimately tie the three stories together, as does the theme of the bond between parent and child, one generation to the next.

Illuminating if not much fun.