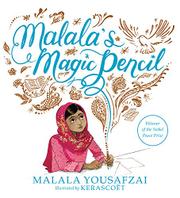 by Malala Yousafzai ; illustrated by Kerascoët

The latest of many picture books about the young heroine from Pakistan, this one is narrated by Malala herself, with a frame that is accessible to young readers.

Malala introduces her story using a television show she used to watch about a boy with a magic pencil that he used to get himself and his friends out of trouble. Readers can easily follow Malala through her own discovery of troubles in her beloved home village, such as other children not attending school and soldiers taking over the village. Watercolor-and-ink illustrations give a strong sense of setting, while gold ink designs overlay Malala’s hopes onto her often dreary reality. The story makes clear Malala’s motivations for taking up the pen to tell the world about the hardships in her village and only alludes to the attempt on her life, with a black page (“the dangerous men tried to silence me. / But they failed”) and a hospital bracelet on her wrist the only hints of the harm that came to her. Crowds with signs join her call before she is shown giving her famous speech before the United Nations. Toward the end of the book, adult readers may need to help children understand Malala’s “work,” but the message of holding fast to courage and working together is powerful and clear.