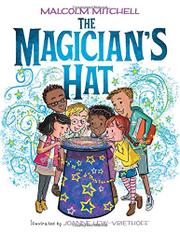 New England Patriot and literacy advocate Mitchell proves to have a touch of magic as an author as well as on the field.

It’s Family Fun Day at the library, and families of many sizes, constellations, and skin tones are participating. Amid book scavenger hunts and storytelling, a magician arrives. He is white and lanky, sporting a purple polka-dot vest and a bright yellow ascot. But most importantly, he has a very large, mysterious hat. He tells the children how he came to Family Fun Day when he was younger and read his very first book about magic in the library. Turning the pages and getting lost in the words inspired him to become a magician. He realized that it wasn’t just about spells and potions, but that books themselves are magical. Three children reach into the hat and find books about their future professions—Amy, a white girl, is a dentist; Matt, a bespectacled black boy, is a football player; and Ryan, a white boy, is an astronaut. The magician then turns the hat to readers, asking, “What are your dreams?” Previously self-published, the work gets a new look from Lew-Vriethoff’s bustling library and bright swirls of magic and bookish motivation. As an entry in the books-are-awesome genre, it’s mostly distinguished by the author’s clear belief in his message.

Perhaps youngsters who think they are more interested in football than reading will take the message to heart.