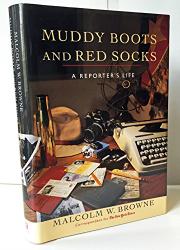 A top foreign correspondent's anecdotal memoir that, despite its ramshackle structure, affords many pleasures and not a few surprises. Browne (The New Face of War, 1965) made a name for himself during the early 1960's as the AP's man in Vietnam, where his ``muddy-boots'' reporting earned him a Pulitzer. (The title's allusion to red socks is a private joke: Browne has worn them since his days as a Korean-era GI who loathed olive drab.) But there's far more to the author's story than Southeast Asia. With time out for an unhappy year at ABC-TV, Browne ran news bureaus in Eastern Europe and South America for The New York Times, which also dispatched him to cover Pakistan's 1971 clash with India and, most recently, the Desert Storm campaign. The author provides vivid accounts of the risks and rewards of front-line journalism: Among other feats, he's survived three plane crashes, countless fire fights, Scud missile raids, detainment by Soviet Bloc constabulary, and the ire of domestic hawks. He also comments on the high-profile luminaries, lesser lights, and media colleagues he's encountered on his travels—from Peter Arnett through Pavel Kohout, Pablo Neruda, and Prince Sihanouk. And, on occasion, Browne editorializes shockingly, most notably in a Malthusian rant on the threat posed to Western civilization by Third World have-nots. While the author says little here about his private life, his episodic recollections of a news-gathering career in the world's combat zones and boondocks make for an absorbing chronicle. (Sixteen pages of photographs—not seen)