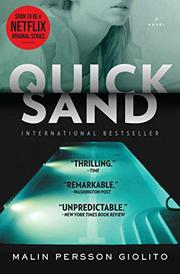 Sharp social commentary through the tragic story of a young woman’s trial for mass murder.

Swedish novelist Giolito begins her English-language debut with a powerful view of a crime scene. To the narrator, 18-year-old Maja, her fellow classmates are still in the present tense, the horror not yet real. As she tells her tale we understand that she is at the center of a school shooting perpetrated by her boyfriend, Sebastian Fagerman, and the question is whether she is complicit. Both teenagers come from privileged backgrounds, she from a loving home she has no patience for, and he the son of "the richest man in Sweden," who verbally abuses him. Giolito keeps the narrative moving quickly, alternating between the present tense of Maja's jail cell and the courtroom and her memories of parties and travels with her jet-setting boyfriend, though as Maja says, “there are no chapters in this mess.” That mess takes in the uneasy place of race in modern-day Sweden and the voracious press that amplifies the details of everything in Maja’s young life. There is no suspense in the shooting of Amanda, Maja’s best friend, or of Sebastian. She did it and admits to it. The literary anticipation here is in the telling of the tale, the facts that turn the story to something else, and yes, the verdict. The rhythm, tone, and language are just right, due in great part to the fine translation by Willson-Broyles.

Giolito gives us the unsettling monologue of a teenage girl as she works her way through her role in murder. It is a splendid work of fiction.