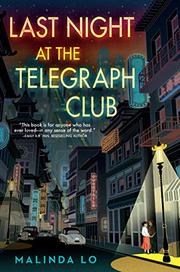 LAST NIGHT AT THE TELEGRAPH CLUB

Finally, the intersectional, lesbian, historical teen novel so many readers have been waiting for.

Lily Hu has spent all her life in San Francisco’s Chinatown, keeping mostly to her Chinese American community both in and out of school. As she makes her way through her teen years in the 1950s, she starts growing apart from her childhood friends as her passion for rockets and space exploration grows—along with her curiosity about a few blocks in the city that her parents have warned her to avoid. A budding relationship develops with her first White friend, Kathleen, and together they sneak out to the Telegraph Club lesbian bar, where they begin to explore their sexuality as well as their relationship to each other. Lo’s lovely, realistic, and queer-positive tale is a slow burn, following Lily’s own gradual realization of her sexuality while she learns how to code-switch between being ostensibly heterosexual Chinatown Lily and lesbian Telegraph Bar Lily. In this meticulously researched title, Lo skillfully layers rich details, such as how Lily has to deal with microaggressions from gay and straight women alike and how all of Chinatown has to be careful of the insidious threat of McCarthyism. Actual events, such as Madame Chiang Kai-shek’s 1943 visit to San Francisco, form a backdrop to this story of a journey toward finding one’s authentic self.