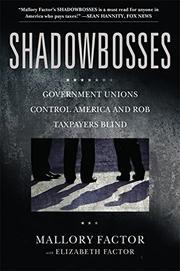 by Mallory Factor with Elizabeth Factor

An errant stab at vilifying government-employee unions as an elemental cause behind national woes.

Those unions, write the Factors, are controlled by “shadowbosses,” a nefarious cabal seeking to bloat the government bureaucracy and milk the working stiff of “forcibly collected” dues (and, by extension, the taxpayer footing the bills) in order to buy off politicians, who then in turn, cast a favorable eye on union needs and activities. This all sounds like the Supreme Court’s recent campaign finance “reform,” or more broadly, American politics since Jackson. Certainly, there are many questions, charges even, that could be leveled at today’s unions: racketeering, extortion, pension fraud, cronyism and embezzlement. But the authors see a much darker scenario, nothing less than a shadow government (à la Dick Cheney, though the authors certainly wouldn’t use that example) bent on national domination. The Factors make valid points about critical-service workers—TSA, nurses, police, firemen and the military—holding some serious aces up their collective-bargaining sleeves. However, when they take teachers to task for poor performance without addressing neighborhood poverty or lament the iniquity of union workers getting paid more than nonunion (which is kind of the point) or those halcyon days when public-minded government servants took pride in their work (“that service meant sacrifice in terms of pay”), then pass the salt. When the authors begin trotting out Sean Hannity, Charles Krauthammer, the Cato Institute and the Heritage Foundation, the heading has been set. One thing is for sure, and it goes begging here: Nothing has even been given to the American worker without a fight, sometimes a bloody one.

A squandered opportunity to make a trenchant, constructive critique of U.S. unions.