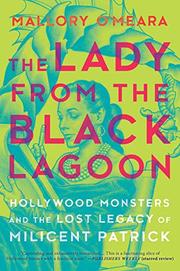 THE LADY FROM THE BLACK LAGOON

Hollywood Monsters and the Lost Legacy of Milicent Patrick

An idiosyncratic, much-needed biography of “a woman before her time.”

Screenwriter and genre film producer O’Meara’s first book is an engaging chronicle of Milicent Patrick (1915-1998), a woman trailblazer in the film industry, as well as the personal story of O’Meara’s own, not always pleasant, experiences in the industry. As the enthusiastic author writes, in 2018, Patrick is “still the only woman to have designed an iconic movie monster.” Yet “she’s not just the queen of monsters, the goddam Joan of Arc.” O’Meara set out on a nearly three-year journey to piece together the life of this largely unrecognized artist. Mildred Elisabeth Fulvia Rossi was born in El Paso, Texas. When she was 6, her father, Camille, was hired to be the on-site superintendent of construction for the William Randolph Hearst estate, and Patrick spent 10 wonderful years as “Alice in Wonderland.” Years later, she changed her name in honor of Hearst’s wife, Millicent (Patrick left out the second “l”). In 1935, she began her study of illustration and drawing at the Chouinard Art Institute. In 1938, “her work caught the eye of Walt Disney,” and she joined his studio, working on The Sorcerer’s Apprentice and Dumbo. Patrick did some bit acting and modeling before getting a big break in 1952, when she was the first woman hired by Bud Westmore for his famous special effects makeup department at the male-dominated Universal Studios. After designing monsters for some science-fiction movies, she took on her most famous design, Gill-Man, for the classic Creature from the Black Lagoon, “still one of the best designed and recognizable movie monsters in Hollywood history.” She never received any on-screen credit, and a highly successful tour she did promoting the film got her fired by a jealous Westmore.

Jam-packed with many funny, goofy footnotes, this passionately written biography will do much to bring Patrick the recognition she deserves.