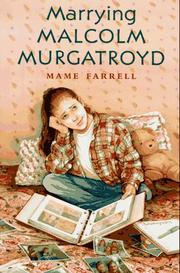 Sixth-grader Hannah has a problem: Malcolm Murgatroyd. Their parents are best friends, and their families share vacations and the running joke that Hannah and Malcolm will marry someday. Hannah is popular and wants to be accepted, while Malcolm is a nerd who brings his stuffed animal to class. His only friend is Ian, Hannah's brother, who has muscular dystrophy and recently became confined to a wheelchair. Hannah defends Malcolm at school because he is so good to Ian. As Ian's condition worsens—in scenes that are sensitively handled—and Malcolm is victim of a particularly mean prank, Hannah is caught in the middle until she decides to confront the school pecking order head on. Almost everything about this story is familiar: plot, setting, themes. The characters are not: Hannah is likable and believable from the outset, Malcolm is unique, and the supporting characters are multifaceted and thoroughly developed. With snappy dialogue and a liberal dose of humor, this is a well-written first novel. (Fiction. 8-12)