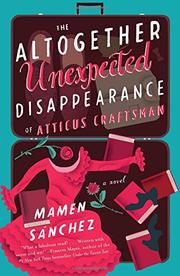 When a wealthy British publisher decides to fire the staff of his Spanish literary magazine, he sends his son to Madrid to deal with the mess. Chaos ensues.

Inspector Manchego (not his real name, but he likes the way it sounds) is hired by Marlow Craftsman to find his son, Atticus, who's been missing for nearly three months. What follows is a riotous, ridiculous farce of a novel; a work of literature that both pays homage to and makes great fun of classic literature and those who love it. The story is told through flashback as the mystery of Atticus’ disappearance, manufactured by the five fierce female friends who make up the staff of Librarte, is slowly explained and brought into the light. But the mystery is not the point; neither are the love stories, the dramatic reveal of a true literary inheritance, the menace of a piratical villain, the manifestations of Tolkien’s ghost, or the transformation of an uptight British family. It is a novel aswirl in chaos, color, friendship, and, above all, a love of literary tradition and the power of a good story. Unfortunately, this can also be overwhelming. For example, the sexual “explosion” at the end of the novel, while in keeping with good magical realist tradition, also falls somewhat flat as an ending. And the narrative voice can sometimes be more clever than authentically amusing, as in sentences like “The spirit of el duende, the mysterious imp everyone talked about, had seized control of his will to such a degree that he was starting to doubt his true intentions.” But there is no denying the energy and charm that set this novel apart from the pack. The most endearing legacy is the loyal friendship cultivated by the five women of Madrid. Their relationships ring true on the page in a way that the romantic moments sometimes do not.

A novel that defies categorization in both positive and negative ways, but it's sure never boring.