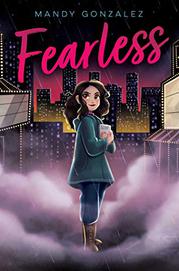 Following a Broadway dream takes a budding actress on an unforgettable adventure.

Middle school student Monica Garcia is thrilled to learn that she’s been cast as an understudy in a real Broadway musical. She travels from California to New York City with her abuelita to begin rehearsals for a new show at the legendary but financially failing Ethel Merman Theater. Monica learns to her surprise that due to unfortunate events she will be stepping into the lead role. As practice gets underway, Monica is unsure what to think of the rumblings from the cast and crew about a curse and possible haunting of the theater. When strange and unexplainable occurrences pull Monica and the other young actors, now dear friends, deeper into the mystery of the cursed theater, Monica finds that a tale from her family history might help point the way to turning things around. Though the storyline follows a familiar Scooby-Doo–type arc, the quirky theater setting and likable characters make for an engaging read. Penned by someone who is herself a Broadway star of such mega-hits as Wicked and Hamilton, the story is peppered with authentic theater lingo and interesting backstage tidbits. Monica and her family have Mexican ancestry.

Will hit all the high notes for theater and mystery fans alike.