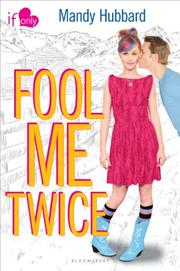 From the If Only series, volume 2

A light romantic romp from Hubbard begins in medias psychodrama.

Mackenzie is returning for another summer at Serenity Ranch and Spa, working in the stables, where her red- and blue-striped hair won’t be noticed by the ritzy spa’s guests. Also returning is Landon, the boy Mack had a summer romance with last year—and who dumped her on the first day of school. Mack is struggling with her still-unresolved feelings when Landon takes a bad fall, hitting his head and getting amnesia. Landon now thinks it’s last summer and that he and Mack are still dating. That gives Mack’s best friend, Bailey, an idea: Mack should get Landon to fall in love with her, then dump him and break his heart. It’s the perfect revenge, except for one problem. This time around, things are different between Mack and Landon. And since she never really got over him, it’s even easier to fall for him again. But what will happen when Mack reveals the truth? The characters are fairly stock, with Mackenzie in particular feeling flat. That the girls can keep Landon’s amnesia a secret from him requires a monumental suspension of disbelief. Still, this book, which launches the If Only series along with Kristin Rae’s Wish You Were Italian, isn’t really about realism.