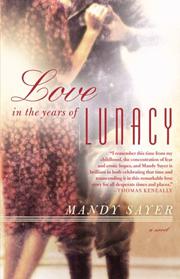 LOVE IN THE YEARS OF LUNACY

A willful Australian girl falls in love with a black soldier during World War II and battles to keep the relationship afloat in Sayer’s inconsistent historical romance (Dreamtime Alice, 1998, etc.).

A year after Pearl Willis dies, her nephew Jimmy discovers a cache of audio tapes she left for him. Much to his surprise, the tapes contain a detailed autobiography, a story that, as she tells him on the tape, she tried many times to write, but somehow couldn’t. Instead, she hopes that Jimmy, an author, will do the job for her. As he listens to each tape, Jimmy learns the true story of Pearl and her twin brother, Martin, both accomplished jazz musicians who play saxophone at a fancy club and sometimes sit in on gigs at an underground night club. It’s at one of these gigs that young Pearl meets James Washington, a black GI who’s recorded with some of the most famous jazz musicians of the era. The smitten couple is denied permission to wed, so they decide to run away together. But their plans are thwarted when James has second thoughts and is transferred to Queensland. Never fear, though. Pearl’s one determined Aussie who’s not about to let racism or war keep her from her man. Seizing opportunity, she shrugs off a botched suicide attempt and her reluctant engagement to the doctor who treated her and concocts a new plan to reunite with James, who’s now been transferred to a unit in New Guinea. Pearl should have stayed in Sydney and waited out the war for her hero’s return, since unfortunately, it’s at this point that the book begins a downward slide with repetitious action, naïve characters and ludicrous behaviors bogging down the core of the story until, blessedly, the book grinds its way to a predictable conclusion. By the end, it’s Pup the dog who deserves the most sympathy: She certainly wouldn’t be wagging her tail so much if she could see into her future.

When the book’s set in Sydney, it’s good; when it shifts to other locales, it's less compelling.