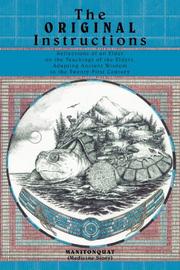 Reflections of an Elder on the Teachings of the Elders, Adapting Ancient Wisdom to the Twenty-First Century

Native American spirituality is the cure for what ails humanity, according to this rhapsodic New Age manifesto.

Mankind went wrong, argues Manitonquat, a Wampanoag poet, editor and counselor, at the first stirrings of civilization when we learned to exploit plants and animals instead of revere them, and to live in big cities instead of little bands. The result is a present-day culture stewing in violence, inequality, sexism, environmental devastation and global warming, one that “plunders everything, robs, rapes, pillages and murders its own and every other species, becoming madder, more enraged and more insane with every passing year.” Fortunately, he writes, we can regain sanity by recalling the “original instructions” the Creator meant us to obey, which are still remembered by the elders of the First Nations (the author, having seen 80 winters, is one). The central injunction is to abjure puritanical notions of sin and damnation and to cultivate a respectful awareness that “all of Creation is sacred and holy.” (And that, Manitonquat insists, means all of Creation, from the stars up above to head lice, intestinal parasites and Osama bin Laden). Further instructions comprise a catalogue of virtues: honesty, humility, generosity and hospitality; a keen appreciation for beauty (vultures and maggots included); the courage to oppose injustice; a childlike curiosity and playfulness. The comforting—and challenging—message is that we can heal the wounds of modernity if we turn away from greed, materialism and arrogant self-importance, commune with the Earth and cultivate an intimate connectedness to each other. Manitonquat’s prose has a sonorous, liturgical tone and rhythm, but it’s shot through with passages of lyrical nature writing (“there is an endless song here, made of wind, cries of sea birds, and the incessant crumbling rollers of the Atlantic roughly caressing the level sands”), indigenous folk stories, child-rearing tips, discussions of hominid evolution and bawdy jokes. His is a soaring spiritual vision that nevertheless remains rooted in the soil of everyday experience.

A rapturous operating manual for the soul.