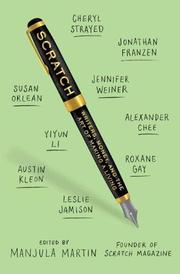 Writers, Money, and the Art of Making a Living

The founder of the online journal Scratch, loaded with information about how authors labor to earn a livelihood, collects essays and interviews that appeared online and supplements those with original offerings.

In this well-organized, fascinating anthology, a host of fiction and nonfiction authors share practical tips and emotional intelligence. Among the best-known authors included are Susan Orlean, Cheryl Strayed, Jonathan Franzen, Roxane Gay, Jennifer Weiner, Richard Rodriguez, and Nick Hornby, all of whose contributions are worthy. Yet many of the most compelling essays come from lesser-known writers, some of whom have yet to publish a book. One such standout is Sarah Smarsh, a former grant writer and current magazine writer who splits her time between her native Kansas and her new home in Texas and whose first book will be published in 2017. Smarsh specializes in writing about poverty, especially the poverty of relatively uneducated whites; in her essay, she reflects on making the jump from her family's poverty to higher education and, eventually, a promising writing career. In “The Best Work in Literature,” anthology editor Martin, the managing editor of Zoetrope: All Story, grapples with similar issues, sharing anecdotes about trying to pay the rent and eat properly in an economy that pays poorly for published writing. Each contributor deals directly or indirectly with the often unhappy intersection of commerce and art in the contemporary American economy. For every commercial success story—e.g., Strayed, Weiner, Franzen, or Alexander Chee—there are countless failures. At times, what can best be termed as "luck" arrives, as in the essay by Nina MacLaughlin, who explains how a piece she reluctantly agreed to write for no pay led to a book contract.

Highly recommended for both experienced and aspiring authors and for avid readers who want to learn the back stories of the contributors.