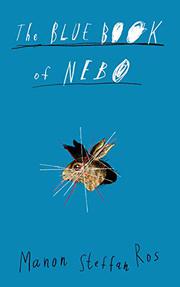 THE BLUE BOOK OF NEBO

A mother and son journal their way through the end of the world.

Veteran writer Ros structures this novel as diary entries written by Dylan and his mother, Rowenna, in the tiny Welsh town of Nebo, which has been emptied following a nuclear apocalypse they call The End. (A nuclear war has devastated America at the very least, and a nuclear power plant meltdown occurs closer to home.) The two have been breaking into abandoned houses for supplies (including notebooks like the “blue book” of the title) to sustain themselves and Rowenna’s young daughter, Mona. It’s clear early on in this trim novel that the usual sense of post-apocalyptic dread doesn’t apply here: The power’s out, but there are no marauding thugs, military incursions, or other imminent threats. And though there’s evidence that the world’s gone off-kilter (like a mutated two-headed hare and masses of slugs escaping the poisoned soil), the prevailing theme is renewal. Dylan’s entries are thick with observations of nature and pride in self-subsistence. Rowenna’s entries are at first brooding, both about The End and her own story, particularly the (absent) fathers of her children. But as the years tracked by the novel press on, she shifts toward more upbeat observations as well. Rowenna reaccesses her grasp of Welsh-language reading and writing, symbolizing the idea that progress distanced us from our roots and that perhaps a reboot isn’t such a bad thing. (Ros translated the book herself from the original Welsh.) The who-needs-civilization-anyhow perspective can get cloying. (“Cooking is a lovely thing. You make something, and then you get to eat it.”) But Rowenna’s flintiness and Dylan’s maturity keep this brief novel from becoming overly simplistic. And a closing twist is both ambiguous and further challenges typical ideas about the genre.

A curiously sweet-tempered novel that finds the upside of global catastrophe.