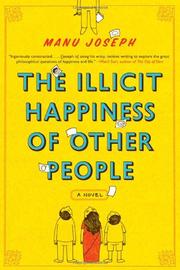 THE ILLICIT HAPPINESS OF OTHER PEOPLE

Ousep Chacko searches for the meaning of the death of his son Unni, who three years earlier had fallen—or perhaps thrown himself?—off a balcony.

A reporter with United News of India, Ousep has become obsessed with discovering the events surrounding his son’s death. There’s no question that Unni had some strange quirks, but it’s not clear to Ousep whether his views and behavior were unconventional or bizarre enough to sustain a diagnosis of schizophrenia. Unni had died at the age of 17 and had shown some talent as an artist, especially as a cartoonist, so Ousep starts to scrutinize some of his son’s cartoons, hoping to find hints of his fate. In one disturbing series, Unni depicted friends and family as corpses, and he had cryptically confessed to a friend: “I know a corpse.” Another series also preys on Ousep’s mind, a sequence of cartoons with “bubbles” for dialogue, though Unni had not had time to ink in the words, so the story he intended to create remains forever perplexing and elusive. Ousep becomes convinced that the secret of his son’s demise lies with two of his friends, Sai and Somen, so he pursues them relentlessly, almost to the verge of stalking. He pumps them for information that they’re unwilling to yield—though perhaps they know nothing at all. Ousep begins to haunt Somen’s house at all hours, trying to catch a glimpse of him and engage him in conversation, but Somen’s parents continually deny that he’s home. Finally, at the end of the novel, Somen emerges from his room, where he’s remained for the previous two years, to explain to Ousep Unni’s unnerving and elliptical take on reality.

Joseph writes with extraordinary wit, cunning and sympathy about both family relationships and ultimate mysteries.