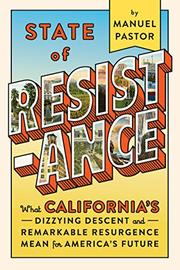 A look at the recent history of California and what it may mean for the future of the United States.

Presenting both a broad overview and also a series of sharply specific deep dives, Pastor (Sociology/Univ. of Southern California; co-author: Equity, Growth, and Community: What the Nation Can Learn from America's Metro Areas, 2015, etc.) traces the story of California since the 1950s, making a compelling case that the state’s revival over the last decade or so offers a road map for America in the age of Trump. It’s a landscape the author knows intimately; at USC, he co-directs the University’s Center for the Study of Immigrant Integration. Here, he develops a multifaceted argument: that California’s growth and prosperity was a direct result of forward-looking policies, including free higher education and vast infrastructure projects; that its decline, growing out of the economic insecurities of the 1980s and 1990s, was triggered by xenophobia and protectionism; and that its restoration is the product of progressive political alliances that have made the state a model for national resistance. It’s a lot to pack into roughly 200 pages (minus notes), but Pastor pulls it off. He is a knowledgeable guide who writes with fluid authority that is accessible but detailed. Furthermore, his book is no facile defense of exceptionalism but rather a nuanced examination of both the state’s complicity in pioneering various destructive policies (reckless tax cutting, anti-immigrant efforts at the ballot box) and its emergence, in the aftermath, as a new political and social landscape, intersectional and built from the grass roots up. “Can the rest of the United States learn from the California story?” Pastor wonders. “The Golden State has its own peculiar history and there is no one size fits all….But no matter how the message may be received, Californians have a special responsibility to communicate what they have learned.”

Provocative and deftly argued, Pastor's book reminds us that the future is unwritten and that it always has deep roots in, and connections to, the past.