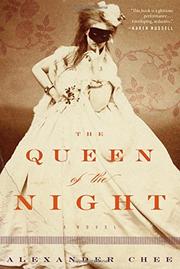 THE QUEEN OF THE NIGHT

Life as opera: the intrigues and passions of a star soprano in 19th-century Paris.

She was the last surviving member of a Minnesota farm family swept away by fever; "Lilliet Berne" is a name she borrowed off a gravestone by the East River on her way to board a ship to Europe in search of her mother's people. That mission is eventually abandoned as her original identity is buried under a succession of new incarnations and schemes for survival. She becomes a circus equestrienne, a high-level courtesan, a maid to the empress of France, a spy, and, ultimately, a "Falcon," the rarest breed of soprano—but double dealings, false steps, and bad bargains mark the way. When she is at the pinnacle of her fame, a writer brings her a book he plans to transform into an opera, hoping she will create the central role in its premiere. Reading it, she realizes with horror that the main character is her and that whoever has written it knows all her secrets. To find out who that is, she unfurls the whole of her complicated history and its characters, among them a tenor who's obsessed with her, a comtesse who uses her, her one real friend, and her only love. The story goes through the Franco-Prussian War, the Paris Commune, and the Third Republic, with cameos by Verdi, Bizet, P.T. Barnum, George Sand, and others. If the plot of Chee's (Edinburgh, 2002) second novel is overly elaborate, the voice he has created for his female protagonist never falters. Always holding a few cards close to her chest, Lilliet Berne commands the power of "the ridiculous and beloved thief that is opera—the singer who sneaks into the palace of your heart and somehow enters singing aloud the secret hope or love or grief you hoped would always stay secret, disguised as melodrama; and you are so happy you have lived to see it done."

MY NAME IS LUCY BARTON
by Elizabeth Strout
Nonfiction

MY FATHER, THE PORNOGRAPHER
by Chris Offutt
Fiction

THE PAST
by Tessa Hadley
Nonfiction

THE FIREBRAND AND THE FIRST LADY
by Patricia Bell-Scott
Nonfiction

THE MEMORY OF LIGHT
by Francisco X. Stork
Fiction

HOW TO WRITE AN AUTOBIOGRAPHICAL NOVEL
by Alexander Chee
Fiction

For all that is unknown of Lilliet Berne—her origins, her allegiances, her real name—there’s one indisputable fact: she has a once-in-a-generation voice. In Alexander Chee’s sophomore novel, The Queen of the Night, the tragic soprano narrates her legendary life, beginning with two memorable entrances to the Sénat Bal at Luxembourg ...

THE MERMAID AND MRS. HANCOCK
by Imogen Hermes Gowar
Fiction

MEMOIRS OF A GEISHA
by Arthur Golden
Newsletter sign-up