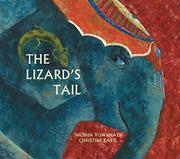 When part of a baby lizard’s tail is chopped off when it’s caught in a drawer, he searches for the “new look” his mother promises him.

In this appealing tale from India, the worried lizard approaches various animals, asking each for its tail. The squirrel, the cow and the cat explain why they can’t help: They need their tails. Three dogs just laugh. An elephant gently points out how silly he would look with another animal’s tail, and he finally agrees. By the time his search has ended and he returns home to his mother, his new tail has already begun to grow. Simply but capably told, with believable dialogue, the narrative is well-paced, allowing time for reflection. In spite of the startling “chop-slice” at the beginning, this is a wonderfully reassuring story. Kastl’s animals are not anthropomorphized, but they seem to smile. Her expressionistic paintings, textured with a palette knife, show well from a distance. With a Ganesh statue, a sign saying “Horn Please,” a family of monkeys and the caparisoned temple elephant, the setting reflects an Indian sensibility—but the story is universally understandable.

Geckos are neither so common nor so freighted with superstition in North America as they are in parts of Asia, but they are familiar and pleasing enough to make this an ideal choice for sharing with preschoolers. (Picture book. 3-6)

A TANGLE OF BRUNGLES
by Shobha Viswanath
Children

AN ELEPHANT IN MY BACKYARD
by Shobha Viswanath

THE BOY WHO DREW CATS
by Anushka Ravishankar

WHAT GOOD IS A TAIL?
by Dorothy Hinshaw Patent
Children