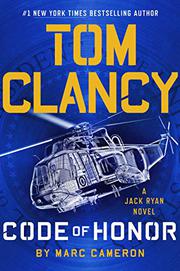 Developers have built artificial intelligence into a computer application called Calliope. Nearly sentient and thought of as female, she’s “no ordinary gaming software” and can take over any connected electronic device and perform any mission asked of her. But don’t call her just a virus. Calliope is a predator, “fairly bursting at the seams as she sought new challenges.” Of course the Chinese military lusts after her like Dr. Strangelove lusted after nukes, so their spies are “all over the damn place.” Meanwhile, Sen. Michelle Chadwick, who harbors a “visceral hatred of all things Jack Ryan,” is shown a video of herself in the sack with a Chinese agent (oops!) and is persuaded to get close to Ryan. That’s a bit awkward, but she agrees to approach the president with an olive branch and then politically destroy him. The Chinese plot spreads a wide net, entrapping Father Pat West, an ex–CIA agent and friend of Ryan's, who's thrown in jail in Indonesia. The poor guy is falsely accused of proselytizing Muslims and faces an uncertain future, and Ryan wants to go to Indonesia and personally get him released. First lady and ophthalmologist Dr. Cathy Ryan plays an important role by assisting on a little girl’s eye surgery. And somewhere out in the field Jack Junior does his bit, making this a Ryan family affair. Of course the story is fun, as the Clancy yarns always are, but some backstories feel like filler necessary to reach 500 pages. Cameron’s writing channels the great man’s style to a T, but one day maybe Calliope will get the mission to take over the series and continue it forever. Imagine three generations—hell, four—of Ryans in the White House.

This one’s as good as all the others and those to come. Read and enjoy, Clancy fans. ’Til next time.