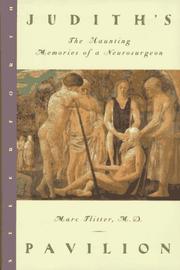 The Haunting Memories of a Neurosurgeon

A collection of beautifully written stories artfully strung together by a fine craftsman. Among surgeons, a group reputed to be well endowed with a sense of their own importance, neurosurgeons have often been depicted as having the sturdiest egos of all. If Flitter, a neurosurgeon at the Hamot Medical Center in Erie, Pa., does nothing else, he shatters that image by acknowledging his weaknesses, airing his concerns, and sharing his failures. He holds in his mind an imaginary hospital wing—named Judith's Pavilion, after a woman whose failed surgery for a brain tumor still haunts him—peopled not only with his failures but with other ``casualties of fate and technology who shared the terribly fragile nature that is our existence.'' As Flitter segues gracefully from story to story, he reveals who the inhabitants of the pavilion are and why their stories cannot be forgotton. Besides Judith, there's Hampton, a medical-school elevator operator whose brain was destroyed when the school's chief of neurosurgery attempted surgery to end his epileptic seizures, and young Jorge, who survived two skull surgeries but died after choking on a toy balloon. A story about a medical-school brain dissection turns into one about the suicide of the resident who performed it, and this is followed by more stories about other troubled physicians who chose their own deaths. Death, it seems, is much on Flitter's mind, but so are human vulnerability and fate's ironies. Fans of Richard Selzer will find much to savor here. Flitter's surgical descriptions are filled with lovely images—``the scalpel traced upward through her skin like a flare at sea''—reminiscent of that talented writer/surgeon's prose. A surprisingly engaging book by a first-time author who bears watching.