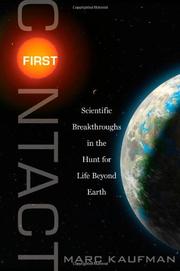 Scientific Breakthroughs in the Hunt for Life Beyond Earth

An up-to-the-minute look at the frontiers of the search for life outside Earth.

Washington Post science and space reporter Kaufman provides useful updates on the newly respectable field of astrobiology. Scientists in a variety of fields are finding evidence that humanity may well have company in the universe. The author begins by looking at extremophiles—living creatures in environments we thing would be hostile to life. Bacteria have been found in South African gold mines, in boiling water near volcanic outlets, high in the stratosphere in the Antarctic and even in arsenic-laden Lake Mono in California. Conditions on Mars may well have been quite favorable to the beginnings of life in the past. Meteorites of Martian origin appear to contain biological material, and an experiment conducted by the Viking Mars lander in 1975 detected what could be interpreted as biological activity. Neither result has been widely accepted, but there is plenty of further research to be performed. A key to finding extraterrestrial life is finding environments where it could thrive. In our own solar system, Mars and the Jovian moons still appear to hold promise, but the big question is whether other stars harbor Earth-like planets that could support life. Data from the Kepler space telescope appears to give an affirmative answer; still, some scientists argue that life beyond Earth will prove to be rare, and intelligent life even rarer. The search continues, nonetheless, using radio telescopes orders of magnitude better than when the Green Bank and Arecibo dishes were state of the art. Kaufman also explores the idea that the constants of physics—such as the weights of elementary particles—show a “fine tuning” without which the universe we know would be impossible. While the concept seems popular with cosmologists, its value for the search for life beyond Earth isn’t obvious. Still, by talking to many of the scientists whose results he describes, Kaufman provides an invaluable summary of the current state of research into extraterrestrial life.

An excellent preview of what may be the next big scientific breakthrough.