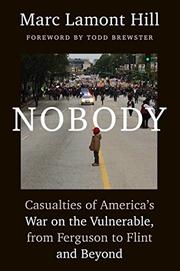 Casualties of America's War on the Vulnerable, from Ferguson to Flint and Beyond

An impassioned analysis of headline-making cases of police shootings and other acts of “state violence” against blacks and other minorities.

Journalist and BET News host Hill (African-American Studies/Morehouse Coll.; co-author: Schooling Hip-hop: Expanding Hip-hop Based Education Across the Curriculum, 2013, etc.) argues that the deaths of Michael Brown, Sandra Bland, Freddie Gray and others are instances of “an increasingly intense war on the vulnerable.” The victims—“Nobodies”—are “Black, poor, trans, queer, or otherwise marked as disposable within the public imagination.” America’s obsession with “free market logic and culture” has devalued the public good and inspired policies that wreak havoc on the vulnerable. For example, the “broken windows” concept of policing, which encourages enforcement of laws against minor crimes, sometimes overcriminalizes harmless rule-breaking. During one such “quality of life” arrest for selling loose cigarettes, Eric Garner, an asthmatic New Yorker, who had been selling “loosies” on the street for years without police interference, was placed in a choke hold and died while repeatedly crying, “I can’t breathe.” In recounting the stories of such incidents, Hill offers valuable perspective and much to ponder: Bland, a young Texas driver who apparently failed to signal and had been impertinent to police before her arrest, was found hanging dead in her jail cell. Deemed a suicide, she had much to live for. Brown, fleeing from a convenience store robbery, was shot dead in the back in Ferguson, Missouri. He was hardly innocent, notes Hill, but “one should not need to be innocent to avoid execution.” By the same token, the behavior of Walter Scott, a South Carolina motorist who resisted arrest and fled after being stopped for a broken taillight, did not warrant death by “excessive force.” Hill’s incisive thumbnail histories of the decaying communities of Ferguson and Flint, Michigan, where government actions led to a water crisis, lend credence to his sometimes-strident insistence that societal forces are stacked against our weakest members.