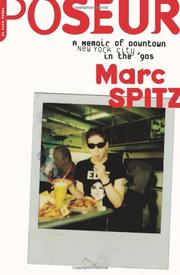 A Memoir of Downtown New York City in the '90s

There is lots of name-dropping and post-punk heroin hipster cliché in this memoir by a rock journalist who seems to be a legend in his own mind.

More of the self-deprecation suggested by the title would have benefitted the manuscript. Though Spitz has published biographies with titles such as Jagger: Rebel, Rock Star, Rambler, Rogue (2011), he’s mainly familiar as a writer for Spin, where he jumped the sinking ship “in 2006 after nine years and fourteen cover stories.” His account of the Spin years shows panache, as he rose from website blogger to gossip columnist to feature writer—where he developed a friendship and rivalry with the more successful Chuck Klosterman. He describes his first encounter with a reporter for that magazine, who described her beat as “a cool hunter…I spot trends and I write about them,” and then he proceeds to gush that “Spin magazine was, in the late eighties and early nineties, a glorious thing. Running into a real Spin writer was akin to brushing up against a senator or congressman. These were people with real power.” Ultimately, Spitz ascended to what he terms “a privileged view,” interviewing rock artists and attending concerts for free. Beyond the scope of the subtitle, there is plenty about college, heroin addiction, unpublished poetry and novels, unproduced LA screenplays and an email friendship with Courtney Love. An opening disclaimer admits that “certain names and descriptions of individuals have been altered”—which is fine when referring to a generic junkie buddy as “Hazy Jane” but inexplicable in repeated references to a well-known scenester who signed the MC5 and the Stooges and inspired the Ramones’ “Danny Says.”

Many of those who look for their real names here will feel they could have written a better book.