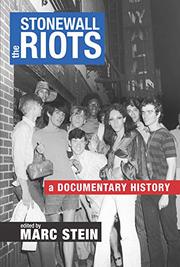 A compendium of primary sources on the historic uprising for LGBTQ liberation.

The Stonewall riots of 1969 are infamous, not only for their electrifying impact on the American LGBTQ movement, but also for their long-contested memory: “who can, who does, and who should lay claim to them”? Using more than 200 documents, editor Stein (History/San Francisco State Univ.; Rethinking the Gay and Lesbian Movement, 2012, etc.) contextualizes the New York City rebellion of transgender and gay bar patrons against a homophobic police raid. Framed in three subdivided parts, each section contains extended excerpts of newspaper articles, fliers, court decisions, and other accounts. Together, they create a mosaic of the cultural and political realities before, during, and after the riots. The editor helpfully provides source descriptions of each section—e.g., “published originally in homophile magazines”—as well as a perceptive introduction that encourages readers to “think carefully and critically about my editorial work.” Significantly, Stein acknowledges that many of his media sources offer “limited discussion” of African-American LGBTQ experiences in their reporting, and he notes that gay rights activists were deeply indebted to black liberation movements. For example, LGBTQ people employed the “direct action tactics” of African-American organizers, “including demonstrations, sit-ins, and riots,” and popular pre-Stonewall slogans “were adaptations or appropriations of ‘Black is Beautiful’ and ‘Black Power.’ ” Stein is less successful in his interpretation of transgender history. For example, when examining police records from the first night of the Stonewall riots, Stein determines that one woman and five men were arrested, “judging by the names.” For many trans people, legal names do not provide meaningful clues to gender. On the whole, the book reflects both the brilliance and contradictions of a multifaceted history. Though people of color are notably minimized in historical records, Stein’s reflective curation is an important contribution to understanding what Stonewall was and what it represents. History students are most likely to enjoy this volume, which is arranged like a primary source textbook.

Not without flaws, but an illuminating, worthy addition to the scholarship.