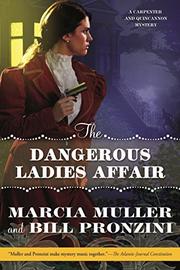 The intrepid partners in Carpenter and Quincannon, Professional Detective Services, land a pair of cases that both begin with adulterous affairs but take them in very different directions.

One of the rights San Francisco suffragette Amity Wellman evidently claims for women is the right to conduct sexual affairs without fear of the consequences. Her error is revealed by a series of anonymous letters warning of righteous retribution and the shot someone takes at her from outside her house—a shot that persuades her new friend Sabina Carpenter to investigate the source of the threats (Amity’s slimy lover, tea importer Fenton Egan? his formidable wife, Prudence? Nathaniel Dobbs, head of the anti-suffragist Solidarity Party? any of the hundreds of the city’s other anti-feminist activists?). John Quincannon, meantime, has a new client of his own: Woolworth National Bank president Titus Wrixton, whose own amours, duly documented by his letters, have already cost him $5,000 paid to a blackmailer who’s now come back for a second helping. Quincannon arranges to observe the transfer of the second installment and follows the man who’s taken the valise full of cash all the way to Gunpowder Alley, where someone shoots him dead inside a bolted room inside a bolted apartment. It doesn’t help a bit to identify the victim as tobacconist Raymond Sonderberg; what’s important is that the valise has vanished, along with Titus Wrixton’s hope of untroubled days.

The husband-and-wife authors (The Plague of Thieves Affair, 2016, etc.) manage the double plot with professional dexterity. Sadly, though, each of the separate cases peaks around the halfway point before ingenuity and interest fade. And shouldn’t the title really be The Dangerous Ladies Affairs?