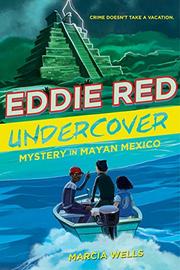 A free trip to the Yucatán pitches Edmund, a young artist/sleuth with a photographic memory, and his OCD pal Jonah into a new investigation involving an unsolved old crime and disappearing gold.

Edmund opens his account sitting in a jail cell, clad in a wet Darth Vader costume, covered in scratches, blood and barf (“I smell awesome”), his wrist in a cast—and really not looking forward to calling his parents. Following this magnificent lead-in, though, the tale goes downhill rapidly, from the disappearance of an ancient gold mask to the climactic struggle with a knife-wielding thief atop a rain-swept Mayan ruin. In between, Wells concocts a nonsensically contrived caper involving Hebrew orthography, poorly integrated “evidence” from false fingerprints to glimpses of the bad guy dressed as a museum guard, and an obvious, no-brainer clue to where the gold is hidden that has somehow gone misunderstood for decades. Moreover, even less-reflective readers will wonder how Edmund and Jonah can break into an apartment and bend various other laws in the course of their investigation without suffering any legal consequences. Along the way, Jonah’s practice of smearing a gift-store Mayan effigy with peanut-butter and blood “sacrifices” comes off more like cultural mockery than harmless fooling. Calo’s accomplished drawings bring characters and details to life but are both rare and, sometimes, too finished to believably represent Edmund’s quick sketches.

Comical and clever in spots but overall, a sad follow-up to Mystery on Museum Mile (2014).