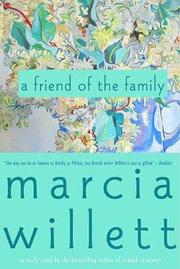 A FRIEND OF THE FAMILY

Over the course of a few years, an interconnected group of friends living in the English countryside experience their share of laughter and tears.

After her naval-officer husband dies of cancer, Felicity Mainwaring hardly expects to be alone for long. After all, for more than 20 years, she has been carrying on with his close friend and fellow officer George Lampeter, a longtime bachelor with a compliant personality. She is understandably stunned, then, when George, with some interference by his formidable mother Esme, meets and marries Thea, a sheltered young woman in her 20s. That George is happy with Thea matters naught to Felicity, and she plots and schemes to wreck his marriage. Thea’s devoted cousin Tim then takes it upon himself to help Thea by having his fiancée’s father David, a famous painter, befriend the not-so-merry widow. Romance ensues, and love brings out a whole new side of Felicity. Sadly, it does not last long, and Felicity is found dead after inadvertently mixing her migraine medication with gin. Her death sends shockwaves through the Moorland community, with both George and David feeling tremendous guilt. Meanwhile, Thea’s bored and drifting friend Polly leaves her loveless marriage to a self-absorbed scientist to discover several willing suitors, including an affable dog-breeder—and the now-married Tim. Polly’s reawakening as a confident and somewhat ambitious young woman takes up much of the novel’s second half, but Willett (First Friends, 2006, etc.) weaves in plenty of quiet subplots involving babies, tentative love affairs and sudden snowstorms. Revisiting several characters from Willett’s previous work, this 1995 British release seems overlong and often dated. And with the exception of the conniving, birdlike Felicity, the characters are interchangeable and far from engaging.

Cozy and almost life-affirming, but unlikely to win new fans.