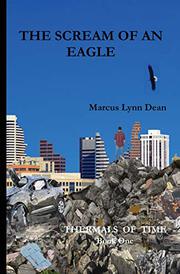 THE SCREAM OF AN EAGLE

From the Thermals of Time series, volume 1

A son of wealth and privilege remains shielded from the economic collapse of the United States in the 2030s until political upheaval and disaster tear the country apart.

Dean begins a Thermals of Time trilogy that bids to be early in what will doubtless be much speculative fiction referencing the COVID-19 pandemic. Killer flu is but one of the scourges he unloads on near-future characters after financial markets collapse in what is known as “the Catastrophe.” By the 2030s, the downward spiral of climate change and wealth inequality has left millions in America homeless and starving in an authoritarian country beset by storms, drought, and disease, though rich elites still cling to security at the top. Colorado College student James Mendez is the son of legendary Robert Mendez, a self-made billionaire who knew poverty and acquired financial success for the sake of power. James prefers his gentle mother’s side of the family: hardworking Colorado ranchers. He falls in love with Anna, a homestead-girl-next-door type, instead of one of the Washington, D.C.–connected women his father prefers. Robert forces his son to stay in college with a threat to ruin the farm household of James’ beloved grandfather via the Mendez control of a government-backed big agriculture business. Meanwhile, life outside the lying-news-media bubble just gets worse. A combination of a natural disaster and a violent uprising within the U.S. military ultimately expels James into the blighted streets outside Colorado Springs, where he realizes just how bad things really are as he joins columns of fever-ridden, emaciated refugees. The author drops references to Stephen King’s The Stand and Larry McMurtry’s Lonesome Dove as forebears, but those were thick, detailed novels. Dean’s own narrative is lean and fast-paced—not as stripped down to essentials as Cormac McCarthy’s doomsday classic, The Road, but enough to keep pages turning. No excessive exposition goes, for example, to the attempted coup that finally destroys the sorry U.S. infrastructure (though indications are the plotters were no better than the rotten system they overthrew). Things just get sadder for James until the cliffhanger leading into the sequel. The protagonist is a young guy cut off from all options who doesn’t so much act as react. This is actually somewhat refreshingly realistic as opposed to the hard-charging survivalist type prevalent in “prepper” fiction.

An engrossing bitter harvest of future bad times that opens a post-apocalyptic trilogy.