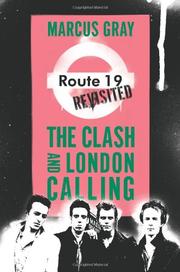 The Clash and London Calling

The 1979 punk classic gets a trainspotter’s treatment.

Having profiled the Clash in two editions of the group biography The Last Gang in Town, British music journalist Gray now turns his attention to the band’s most enduring album. London Calling was formulated at a critical juncture in the band’s career. The group was coming off an unfocused sophomore album and adrift without any formal management after a split with their Svengali, Bernie Rhodes. Drawing on sources that ranged through rockabilly, R&B, blues, funk, reggae and jazz, band members Joe Strummer, Mick Jones, Paul Simonon and Topper Headon thrashed up enough material for a two-LP set during protracted rehearsals at London’s Vanilla rehearsal space. After a relatively brisk setup surveying the album’s oft-arduous sessions with unpredictable producer Guy Stevens, Gray brings the narrative a grinding halt with 200 minutiae-filled pages devoted to the set’s individual tracks. No fact is deemed insignificant enough to be omitted, and no research is left unutilized, no matter how irrelevant or expendable. The book becomes mired in a series of digressions about such subjects as English rockabilly star Vince Taylor, American R&B rocker Bo Diddley and his eponymous beat, Jamaican “rude boy” songs, England’s Two-Tone ska-punk movement, the Spanish Civil War, Coca-Cola, actor Montgomery Clift, etc. While some of the material has a bearing on the record at hand, it is left unsifted. Worse, Gray ignores the relationship between the Clash’s original “Jimmy Jazz” and its inspiration “Staggerlee,” a provocative connection that goes unmentioned until a later passage about a quotation from the reggae cover “Wrong ’Em Boyo.” Like his track-by-track explication, a chapter devoted to the imagery and marketing of London Calling—with an emphasis on the package’s iconic photo of Simonon smashing his bass—and a painfully attenuated charting of the band’s later history bog down in a sump of unedited detail.