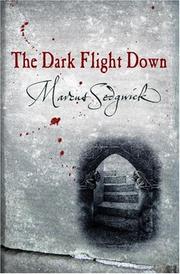 THE DARK FLIGHT DOWN

Boy and Willow are immediately separated as this moving sequel to The Book of Dead Days (2004) begins. Boy’s suddenly owned by Kepler; Willow is dumped at an orphanage. But when Boy’s sent back to his old house on an errand, Imperial Guards seize him and toss him in the Imperial dungeon. A terror looms down there, possibly the same Phantom terrorizing the City. Meanwhile, the emperor has demanded immortality from his right-hand man, Maxim. Maxim sweats to find the ancient, treacherous book of magic that will reveal all. Kepler secretly brings it when he and Willow sneak into the castle. The Phantom is revealed in court, and Boy and Willow—sneaking away as the court explodes in chaos—open the book and find historical family revelations that Boy may or may not like. Sedgwick doesn’t answer all questions, but Boy and Willow’s noble choice and tender relationship stretch forward into a tentative, simple future, making the end supremely satisfying. (prologue, epilogue) (Fantasy. YA)