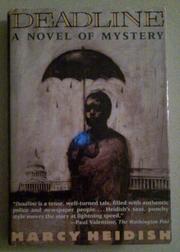 Nan Skillen, 35, is a crime reporter for a big Washington paper. Her short-lived marriage ended ten years ago; a longer effort at becoming a seminarian ended as well. And for many years she's been totally estranged from her doctor father, now in town to accept a major award for his work with the poor in Appalachia. Meanwhile, there's a burgeoning love affair with City Editor Tom Nichols, but at the moment all of Nan's energies are directed to a series of murders of women—all volunteers at one of the city's shelters for women, and all killed in the same grisly way. The police, with Nan's help, capture noisy, aggrieved Fred Dade, who's been pestering the shelters, searching for the wife who ran away from their West Virginia trailer park weeks ago. Then yet another killing—a male victim this time—lets Dade off the hook but triggers in Nan some long-repressed memories that lead to a grim confrontation with the murderer. The high-tension plot is enhanced by sharply etched pictures of life in the shelters and in the newspaper's city room, by many vivid characters, and by a crisp, clean, first-person style. Heidish (several well-received biographies of famous women: A Woman Called Moses, etc.) imbues her haunting story and her gutsy heroine with a rare sense of tenderness and poignancy. An impressive mystery debut by a gifted writer.