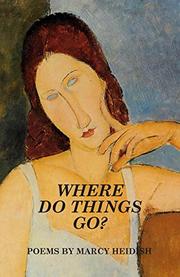 Where Do Things Go?

A powerful collection of poetry in which humor is tinged with sadness and grief is leavened with warmth.

In her third book of poetry, Heidish (Destined to Dance, 2012, etc.) experiments with punctuation, spacing, and the physical shape of texts. Most often she writes in free verse as she reflects on her life as writer, poet, and instructor. “The Hour of Blue” appears to convey the awkwardness of a new relationship with its averted eyes and shared silences, but the speaker turns out to be addressing a roster of unknown pupils before the start of a new semester. This clever rendering of the student-teacher dynamic is but one example of the author’s skill and creativity. Similarly, she’s able to evoke an entire life story in just a few words, as in “The Wizard,” which reveals the secret lurking behind the gruff exterior of a gifted repairman whose grey eyes are “paired nail-heads.” Nevertheless, themes of mortality and loss are front and center as Heidish bears witness to the passage of time (“Let me be an old rock-wall in an Irish field”) and bids farewell to various people (her first editor, her oldest friend, a beloved aunt), places (a bookstore, a tearoom, a bakery), and things (her typewriter). Two poems consider the healing effects of live music in medical settings. In “Up Near the Ceiling,” the playing of a harp in a hospice inspires this gorgeously consonant and assonant question about the spirits of the dying: “do they float on a lavender ocean, / foam-flecked and lit from far below?” At the same time, not all poems focus on doom, gloom, and fading light. Heidish addresses more quotidian concerns, such as the impatience of a doctor’s waiting room, the indignities of summer, and the nature of hats. She also writes in the voice of a neglected pet fish and wonders how bears receive her discarded writings as they rifle through the garbage. A poem about a 60th birthday celebration features “all of those tiny candles, / studding a long barge of tiramisu,” and the speaker wryly calls for legislative action limiting the number of candles permitted by law, for the safety of us all.