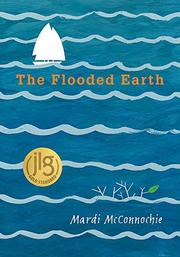 From the Flooded Earth series, volume 1

A high-seas adventure stars 12-year-old twins Will and Annalie, who seek their missing father in a flooded, post–ecological-collapse world.

This trilogy opener, first published in Australia as Quest of the Sunfish (2016), begins in the slums of a coastal city 40 years after the Flood that reshaped global geography and politics. Will loves sailing and working in the workshop with their dad, Spinner, while Annalie is more bookish and is the first kid from Lowtown with a scholarship to her prestigious school. Neither knows of anything hinky about Spinner, so they’re both shocked when Spinner takes off moments before intruders trash the workshop. Annalie, accompanied by Essie, her only school friend, escapes from school and sneaks home to help. It seems as though Spinner’s on the run from the Admiralty that rules most of the post-Flood world, and the kids aren’t safe. The three children and a cyborg parrot with augmented intelligence set out on the Sunfish to find Spinner. As is typical of the cli-fi genre, McConnochie explores current-world issues within her adventure. Climate refugees and strict immigration laws have created a permanent underclass and a human trafficking problem, which privileged Essie begins to understand when the adventurers are joined by a starving former slave boy. Racial descriptors are few; naming conventions will have readers imagining the principals as mixed-race or Asian.

Despite the post-disaster setting, an exciting and old-fashioned sailboat quest with pirates, secret codes, storms, and cannibals.