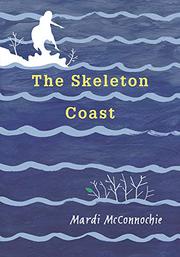 The postdiluvian Flooded Earth trilogy concludes as it began, with high-seas derring-do.

Ever since Will and Annalie’s father, Spinner, vanished at the onset of The Flooded Earth (2018), they’ve been searching for him along with their friends Essie and Pod (and of course Graham, their cybernetically enhanced talking parrot. Their dystopian world, flooded not from climate change but due to the hubris of weather-controlling scientists, is ruled by the wicked Admiralty. Spinner was studying the work of the scientists whose research created the Flood, and the Admiralty will stop at nothing to capture him—because they want to use his research to create weapons. The children must fight not only the Admiralty, but the many dangers that dot their world’s coastlines and oceans, beginning with a fight with pirates at the onset of this adventure. Along the way they rescue Pod’s young enslaved sister, cross the dangerous Outer Ocean, escape from deadly shadow whales and wild dogs, and repeatedly escape from the wicked Admiralty commander. And perhaps, they discover, not everyone in the Admiralty is wicked; once, “they were a force for good in the world.” If only the good members of the Admiralty can be convinced to see the horrors of the refugee camps, perhaps things can change. Race is unspecified, though there is some indication of whiteness among the Admiralty and the wealthy.

For all its dystopian setting, this satisfying trilogy closer is full of pluck