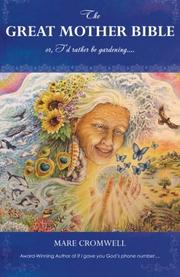 A nature mystic shares her latest series of engaging conversations with Mother Earth in this spiritual guide.

In November 2013, Cromwell (Messages From Mother…Earth Mother, 2012, etc.) received “distinct instructions” from “Mother,” the sacred being featured in her previous book, to put off her move to Washington, stay put in Maryland, and write a “Bible.” The result is this record of conversations that took place between Cromwell and Mother from January to July 2014. In the introductory chapter, “Surrender, Listen and Show Up,” Cromwell reviews her background as a nature mystic, which includes communing with Native American guides, beating a lymphoma diagnosis through alternative healing, and working as a garden designer. Then, within 37 other dated chapters showcasing the conversations that Cromwell recounts, Mother reflects on a range of topics—the value of the “Christ Consciousness” (Mother, according to the author, can “amplify it exponentially and help heal so many more animals, humans, ecosystems and more with this love energy you are directing into me”), aliens on Earth (who have good intentions, generally, and a greater understanding of the universe, although some have caused damage, including suppressing women’s power), and more. Cromwell herself tees up, echoes, or even builds on Mother’s remarks while revealing her love of chocolate, struggles with a fluctuating romance, and a reconciliation of sorts with her apparently troubled Roman Catholic childhood (with Mother noting that the Virgin Mary is indeed a female divine iteration). The narrative concludes with Mother’s rally to “Know that our Quantum Divine Love is always here for you to tap into. Always. We love you.” An embracing maternal universe is a wonderful prospect, and Cromwell brings a pleasing blend of humor and sincerity to her latest spiritual work. The chatty asides are largely amusing, with Mother and Cromwell even bantering about the latter being gassy. This gardener author would have benefited from pruning her narrative a bit, however, since the sprawling book covers subjects ranging from nuclear testing to tree spirits, ice storms, and sustainability. Still, there is plenty of dip-in appeal to this work, an enjoyable female version of Neale Donald Walsch’s Conversations with God.